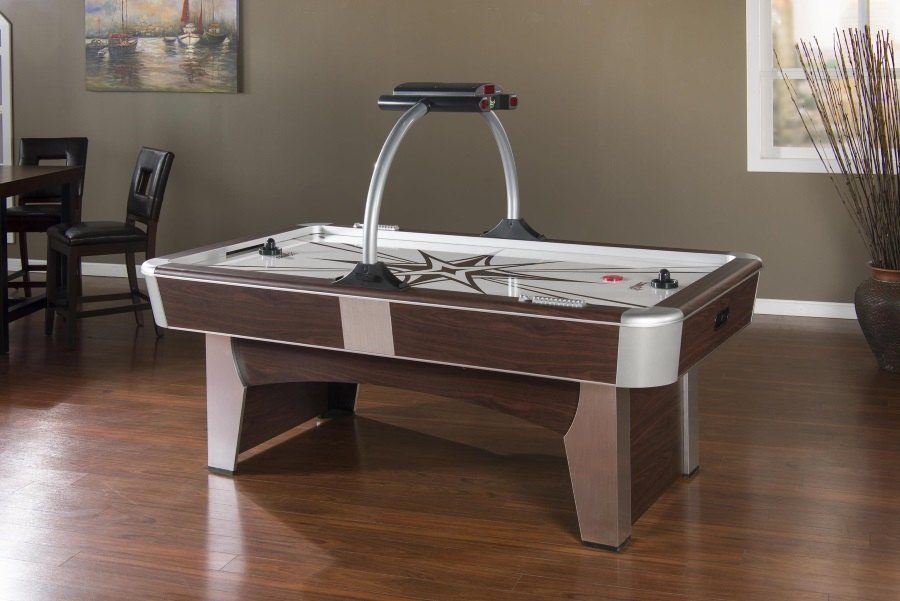 The History of Air Hockey

While air hockey has only been around for a few decades, the history of the sport is fascinating. The initial idea was brought forth by a group of three Brunswick Billiards employees, Brad Baldwin, Bob Kenrick and Phil Crossman, back in 1969. At the time, pool and foosball were some of the few in-demand games, with room for new competitors in the industry.

The 1970s: Introduction of Air Hockey

Air Hockey was officially introduced to the market in the early 1970s.  The idea behind it was to create a mini hockey game with a table surface so smooth, the puck could almost float on it.

The biggest challenge was creating a frictionless surface. After struggling with the practical implementation of this idea, the founders hired engineer Bob Lemieux to create the perfect table design. The first air hockey table design was finalized in 1972. It consisted of two goal posts, a puck and strikers.

As soon as it was launched, air hockey became a huge success. The reason behind this was the innovative idea and design as well as the brand name Brunswick Billiards. The game gained immense popularity in the state of Texas. Experts cited that half of the game’s players originate from Texas, which is a shocking statistic considering it is played worldwide. It is also popular in other states like Chicago and San Francisco where it has bred champions like Billy Stubbs and Davis Lee.

In air hockey’s first ever tournament, the winner was titled ‘The Best Air Hockey Player in the World’ and also given a hefty $5000 reward. However, the reward was not the only feature that attracted 31 teams from different regions. The championship was sponsored by Marv Albert, one of the NBA’s most popular announcers.

This event took place in a hotel in New York City. Barnett and Spiderman, both college students at the time, made it to the final round. After 40 intense matches, Spiderman lost the game and won $1000 as runner up.

The Emergence of Regulatory Bodies

Since the game was created under Brunswick Billiards, the brand registered for a patent which was approved just after the first tournament was held.

It was then that proper associations for the sport were also created. In Texas, the Regional Air Hockey Association was formed to schedule future leagues and tournaments. This was followed by the formation of the US Air Table Hockey Association (USAA) which was built to establish regulations and ground rules for the sport. In fact, the USAA is still the main regulatory body for air hockey and holds an important place in the industry.

While the first decade was a profitable one for air hockey, the sport faced a number of challenges in the following two decades. Sales dropped rapidly, and the main reason behind this downfall was the introduction of video games, particularly joystick games.

The Slow and Steady Revival of Air Hockey

Fortunately, the downfall of air hockey was short-lived as different organizations and individuals came together in support of the game. The USAA was developed to ensure proper regulation and professional level tournaments were introduced to engage players and build enthusiasm for the sport.

In addition to this, individuals like Mark Robbins also made significant contributions to the revival of air hockey. Robbins has not only been playing the game for over 30 years, but also builds tables suited to every player’s needs.

In collaboration with Mark Robbins, Phil Arnold (the founder of USAA and an air hockey player) managed to save the game from becoming completely bygone by taking it underground.

The two published a newspaper ad asking for donations which they used to buy multiple air hockey tables and rent a truck to set up an air hockey shop inside a run-down barn in Minnesota. They contacted Brunswick Billiards and Dynamo Corporation (a foosball table manufacturer) to recreate original air hockey tables.

The first year, Robbins and Arnold did not have much luck as only an estimated 100 air hockey tables were sold. The next year, however, as awareness of their project grew, they began selling thousands of tables annually. Today, Mark Robbins is the owner of Gold Standard Games, a marketplace that sells all kinds of air hockey tables.

Critics believe it was this effort that was the major force behind the revival of air hockey. Today, air hockey is a mainstream sport. It can be divided into two categories: professional tournaments and personal use. The Air Hockey Players Association (AHPA) is one of the biggest organizations in which members join to stay updated with upcoming tournaments and participate in leagues. On the other hand, many players also enjoy playing air hockey in private. These individuals buy small air hockey tables for entertainment centers in their homes, usually placed in basements.