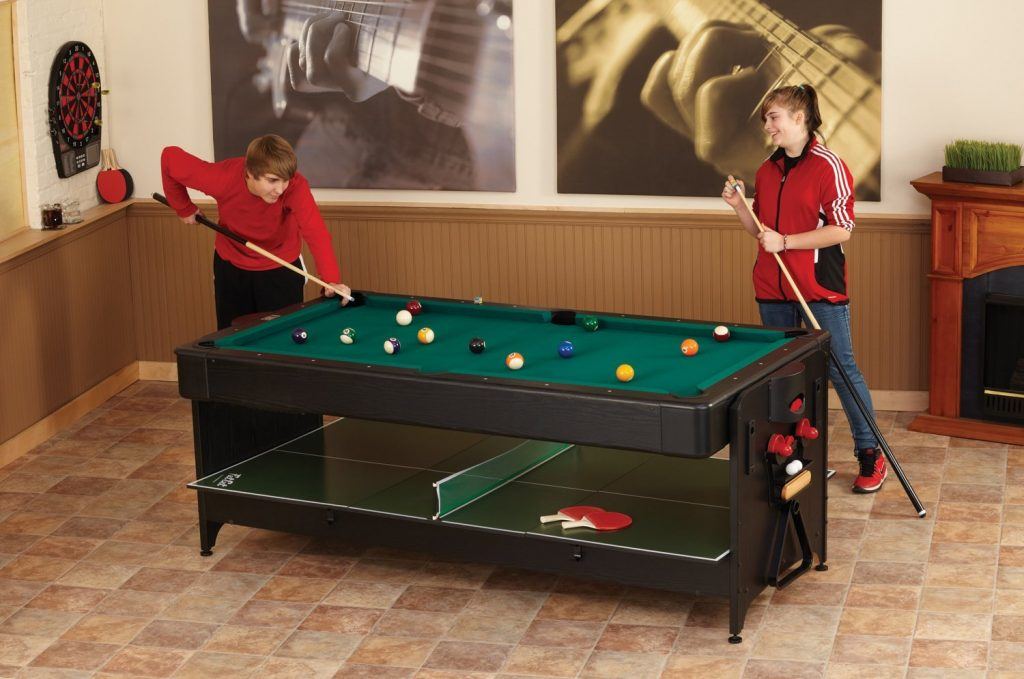 In this article, we will take a look at the three best Air Hockey tables for sale. Air Hockey is a very well-known sport. Many people from all walks of life know about it, and many love playing it. It is a mini version of Ice Hockey without the Ice and most of the players. The most common form is a 1v1 game even though some tables are wide enough for 2v2.

The gameplay is pretty straightforward despite its plethora of rules (especially regarding official tournament regulations). You want to score the requisite number of points before your opponent does. That is how you win. There are many rules concerning many details such as committing fouls and what constitutes as a legitimate goal;this is a reason why it is important to have good equipment available, so you are in full control of what penalties arise from your play.

If you get a bad puck and you might be ‘committing’ fouls by accident, such as shooting the puck over the edge just because you were trying to deliver a fast or tricky shot. If you get a table with weak air power due to a cheap fan blower, then gameplay may be dulled or even frustrating with a puck that is not able to glide freely.

Any real Air Hockey enthusiast or professionally competitive player will tell you that there is a lot involved with knowing what to look for regardingproper equipment. For example, a good table has notable features and versatility. Electronic score keeping is one of those great features.

It is invaluable since human memory is highly prone to error, especially in exciting situations where things are happening so fast, and when you and the opponent are acting on instinct to get right back in the fight after each play.

The main reason why high-end tables are so expensive is mostly due to brand quality. However, another important element in this respect is the table length. When playing on tables greater than the typical 6 foot length, the potential for advance bank shots goes up on seven and eight foot tables respectively.

Also, in terms of durability in this market, you usually get what you pay for. In other words, our short list consists of tables that aren’t necessarily budget friendly. Our picks for this article are about the best, nothing else.

Now, that we have given a brief rundown of what goes into making a good table, we will give you the three best Air Hockey tables we found based on the criteria above. We think after you take a look at these highly impressive options, you will understand why we picked them. We also hope that this article will help you understand more in the end when it comes to assessing the quality of Air Hockey tables. 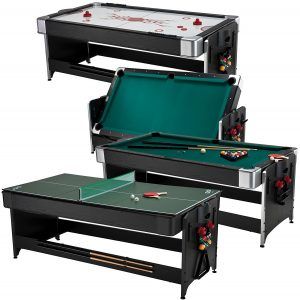 The Fat Cat Original 3-in-1 is the best Air Hockey table for people who want the ultimate in versatility. Gamers who want to have the greatest ratio when it comes to space and fun have no better place to look than this table. All surfaces are high-quality and function properly.

For the billiards surface, the bumpers are made from rubber and the material is Teflon green cloth. A compact tri-fold top makes up the table tennis segment.

There is a high output fan for a thick air cushion to give the puck in Air Hockey a smooth glide. Also, the surface resembles a real Ice Hockey rink. Four pucks, four Air Hockey Paddles, billiards set with a resin triangle, a couple of two piece cues at 57″, a billiard brush, a couple of sticks of chalk, two tennis balls and paddles, and net and post set. 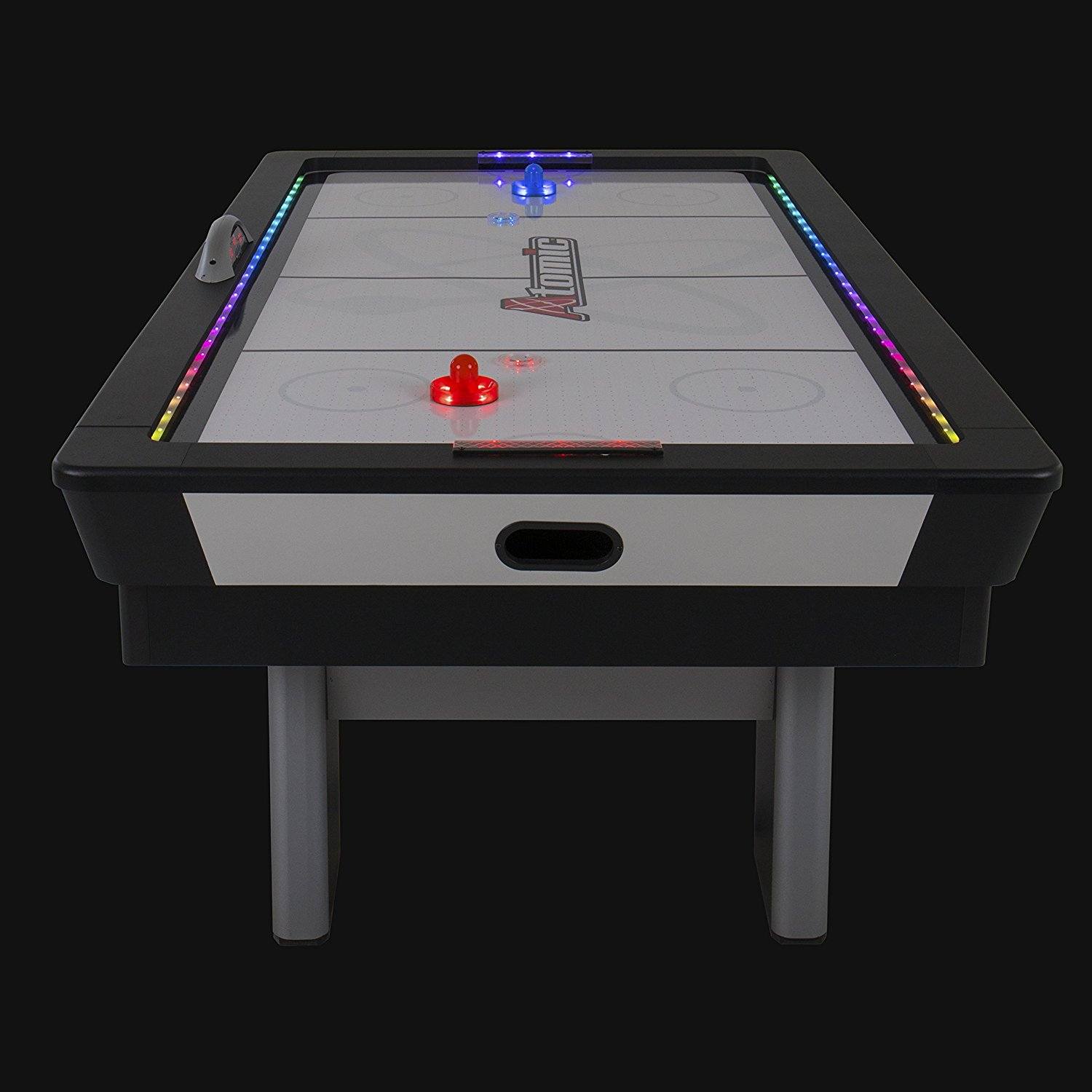 The Atomic Top Shelf is the best Air Hockey table for people who are looking for the coolest air hockey experience you can have with your family and friends.

PVC laminated MDF turns Air Hockey speed to turbo. At night,you can still enjoy the dark of the night while playing Air Hockey on this table with the dazzling LED Lumen-X lighting. Don’t be surprised if everyoneis hypnotized with its awesome RGB multicolor effects. And that’s just the start.

This amazing table comes with preloaded high tempo music to maximize the intensity of the game and atmosphere. The lights even react to scoring. The beautiful LED puck and paddles will make you will never want to play with normal pucks again.

The stability of the Atomic Top Shelf Air Hockey table is fully secured with four large legs and solid playing surface. Want to change it up even more? Use the Hexagonal LED spinner puck for even more insanity with its unpredictable ricochet behavior. You and your friends will be hooked. 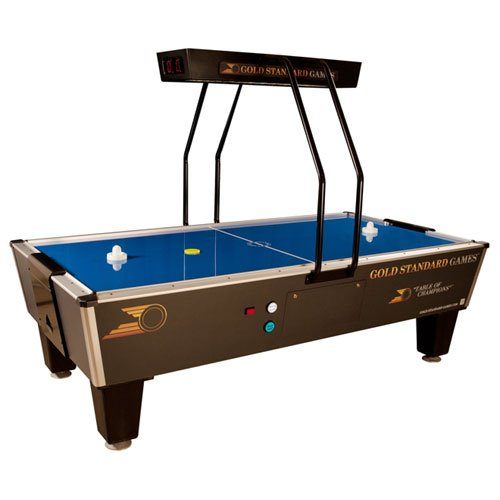 Low profile rails made from high-density aluminum provide the greatest reverb for maximized ricochets of the puck. High-quality goal construction is designed to eliminate problems in operation.

The overhead scoring unit is one of a kind with the proprietary black light/normal light combination overhead lamp.

In other words, you can set a competitive atmosphere with the normal light and generate a wild/arcade mode with the black light. Automatic scoring is done on the side-mount display. Thistable is meant to be the pinnacle of any game room.

There you have it. The best 3 Air Hockey tables we found. We hope you liked our picks. We think each option in the list is the best in their own right for their respective purposes. We can’t deny that the Gold Standard is just that. At the end of the day, the 3rd option is King when it comes to pure Air Hockey.