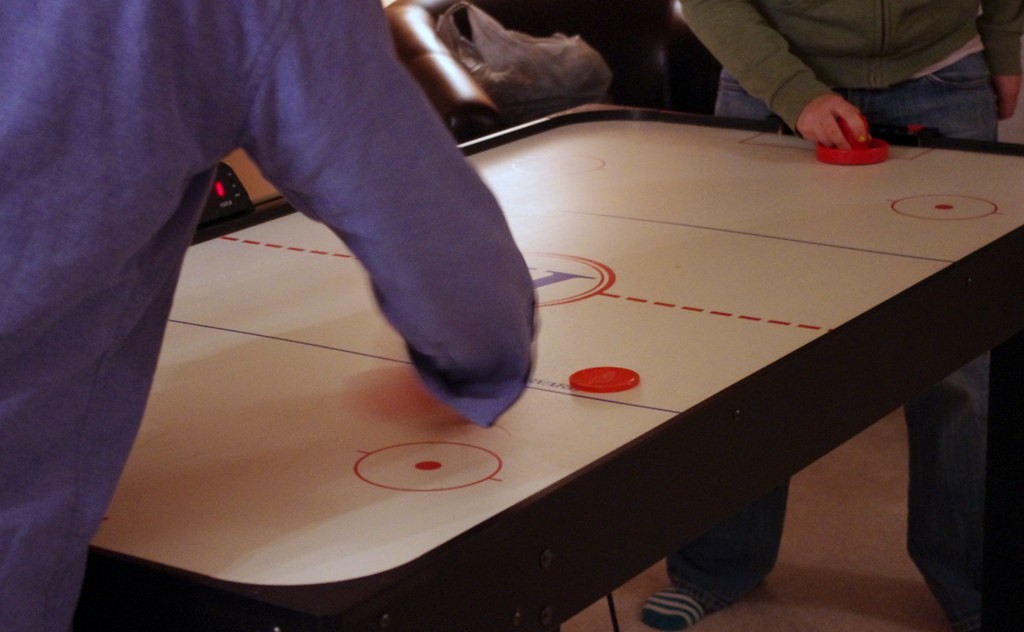 Learning to play air hockey isn’t too difficult, but it takes a good amount of practice and knowledge of the right techniques to become a professional player.

The game begins with a coin toss to determine which player goes first. The player who scores 7 points wins the round. However, a point is only scored if the puck fully goes inside the goal.

Each time a player scores, the other player serves next. Moreover, each table has a centerline, and a player can only strike the puck when it is on their half of the table. If the puck sits on the centerline, both players can strike it.

One very important rule of air hockey is that a player cannot place their mallet on top of the puck in order to stop it; they can only place it on the same surface level as the puck.

At the same time, they cannot touch the puck with anything other than the mallet. Hands, arms or any other body part in contact with the puck can result in a penalty.

Lastly, both players are given 10 seconds for each turn and can call for a time out if the puck is in their possession.

Tips for Becoming a Professional Player

A very common mistake made by beginners is holding the striker with their complete hand. This is the wrong way to hold it because it requires full arm strength to move the puck which wears out the player faster. It also slows down the puck speed, reducing the chances of making a shot, as the opponent has more time to block the goal.

To ensure the best speed and motion, insert 2-3 of your fingers into the striker. Not only does this improve the puck’s speed immensely, but it also gives the player more control, thus allowing them to block a goal.

Master the Technique of Drifting

Players who know how to drift in air hockey are clear winners. Drifting involves slowly sliding the puck into a single direction. The key is to hit the puck into the opposite direction while it is moving in order to to catch your opponent off guard.

For example, if you hit the puck left, your opponent will be ready to block you from the left, leaving the right side clear. Use this opportunity to change the direction of the puck and aim for the right side of the goal.

However, this move takes a lot of practice and timing is the key to getting the shot right. Even a second above or below the right time can result in the puck missing the goal.

Another important thing to note is that there are 3 different types of drifts, each with their own technique. The first is the basic drift which entails hitting the puck lightly towards a 40 degree angle. It’s the most commonly used drift because it allows the player to shoot anywhere along the centerline.

The second drift is the L-drift. Invented by Owen Giraldo, a singles and doubles air hockey champion, this drift is similar to the basic drift but with a few tweaks. The puck is hit at a 40 degree angle after which the mallet is used to stop it. Then, it is tapped sideways - it hits the wall and goes back to its original position. As opposed to the basic drift, the L drift allows for more time to perfect your shot and has more room for differentiating the shot sequence.

The third drift, known as the Circle drift, is another very popular type of drift. It was invented by Tim Weissman, an air hockey champion in the 1980s. Here is how it works: the puck moves clockwise, making a diamond shape. The mallet comes into contact with the puck once at the top and then the bottom in order to reverse its movement to a counter-clockwise position. What makes this drift easy to execute is the fact that you can make shots from different points on the table and there is only one way to play it. So it takes little practice to get right, with limited room to fail.

The idea behind all drifts is to trick the opponent into blocking the wrong direction so that the player can shoot easily into an empty goal post.

Another mistake that amateurs make is placing their puck in the middle of their goal. This allows opponents to easily score trick shots through drifting as well as straight shots.

The right way to defend your goal is to use the infamous ‘Triangle Defense Strategy.’ This strategy entails placing the striker above the goal on the first notch of the table. This way, any straight shots that the opponent hits will automatically be blocked without the need to even move the puck.