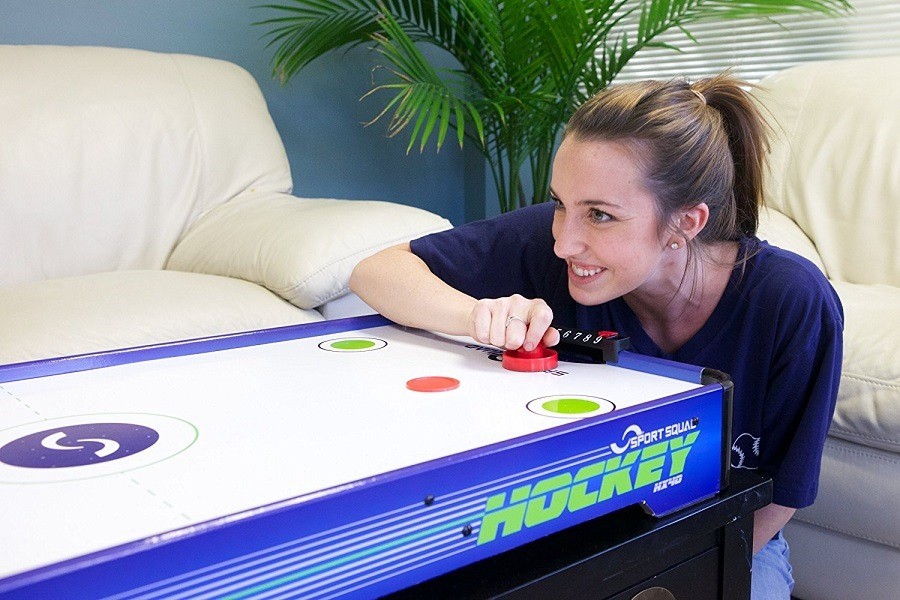 Air hockey is one of the most enjoyable table sports. The combination of fast-paced, reflex dependent action along with the competitive, one-on-one nature of the game make it a fan favorite when it comes to arcade games. With the market for air hockey tables being bigger than ever, it is the easiest it has ever been to find an affordable table that will fit perfectly into your setup.

The way an air hockey table works is not necessarily complicated, there is usually one or multiple fans beneath the table, and there are many small, evenly spaced holes across the playing surface of the table. This creates a small cushion of air over which the puck can glide, somewhat reminiscent of the ice in actual ice hockey. Air hockey as a sport has been expanding steadily over the past 40 years. Air hockey was originally developed in the early 1970s by employees at a billiards company, and it has come a long way since then.

Whether you want to recapture the childhood joy of visiting the arcade and playing some air hockey with your best friend, or you are a professional player who wants a high quality table, there are products available to cover your every need.

Choosing the right air hockey table may seem tricky at first, but it is actually simple once you understand a few key aspects and how they tie into the type of setup you would like to have and how well they would correspond to your budget.

The Sport Squad HX40 is an affordable beginner level air hockey table recommended primarily for use by children. The table is 40 inches long, so it is on the smaller end of the spectrum and it does not have legs, so it is recommended for use on a tabletop or a non-carpeted floor (the motor may overheat when used on a carpeted floor).

The build quality is not the best part of this model, as we had a few hiccups with the motor, only time will tell whether these issues will be sorted out on their own eventually, or they are the symptoms of an upcoming motor failure. However, the motor is powerful enough to provide a decent amount of air cushioning for the puck, especially considering the smaller size of the table.

The table comes with a 2 inch puck, which is recommended for smaller tables over 2.5 inch pucks. Another good aspect to the table is that it is rather durable, so a few rough play sessions won’t result in a broken air hockey table and a waste of money. It also features manual score counters above the goals so you can keep track of the game without having to commit the score to memory. The area where this model of air hockey table truly shines is in its very streamlined assembly process. Many air hockey tables have complex assembly which can result in headaches and a lot of wasted time, but on this model, all that you have to do is screw the goals in place and you are ready to play!

This ﻿table truly shines if you have children who really enjoy air hockey. The small size makes it rather inconvenient for adults to use. The price is reasonable and the build quality is better than the price would suggest. We purposefully put it through a few rough games and the table came out on top every time.

The only part of the table that seems lacking in build quality is the motor, it overheats easily if the table is placed on a bed or a carpeted area and generally seems to have some issues getting started before some game sessions. By the time of this review, our model has not yet died, but it does not inspire confidence to see a motor have so many hiccups.

The fan is not powerful enough to make the mallets float, so there is somewhat more friction than you will be used to on a tournament-level table, but the puck floats relatively well, and when you take into account the small size of the table itself, the air cushioning is effective. We also scoured customer testimonials and cross-referenced them amongst each other to find some of the most common criticisms and common praise for this product. The following is compiled from these testimonials.

A very commonly praised aspect of the product is the ease of assembly, the table essentially comes pre-assembled and all that must be put on is the goals, this makes for a good christmas or birthday present as the assembly process won’t take long and you will have less of a risk of your child seeing you assembling their gift.

The most common complaint with this model of table is the motor, depending on your table, your motor can work for as long as several years to several days, which is quite frankly astonishing, even given the lower price level of this model. It is somewhat mind-boggling that the air hockey table itself is built very strongly but the motor is very finicky and unreliable.

Finally, most customers purchased this product as a gift for their children, as this table is the ideal size for younger players and strikes a marginally good balance between quality and price.

The list price for the HX40 is just under $80, which is a very reasonable price for an air hockey table, considering the higher end models can go for up to $1000 dollars or even higher. At the time of this review, this model of table was discounted by 13% with an actual price of $70. The shipping weight is just over 15 pounds. In conclusion, the HX40 is an excellent table for children, it is set back by its unreliable motor, but the overall build quality and durability is good enough for some rough play and the size is ideal for younger children. The best selling point is the relatively low price, after all, who wouldn’t want an air hockey table for less than $100?